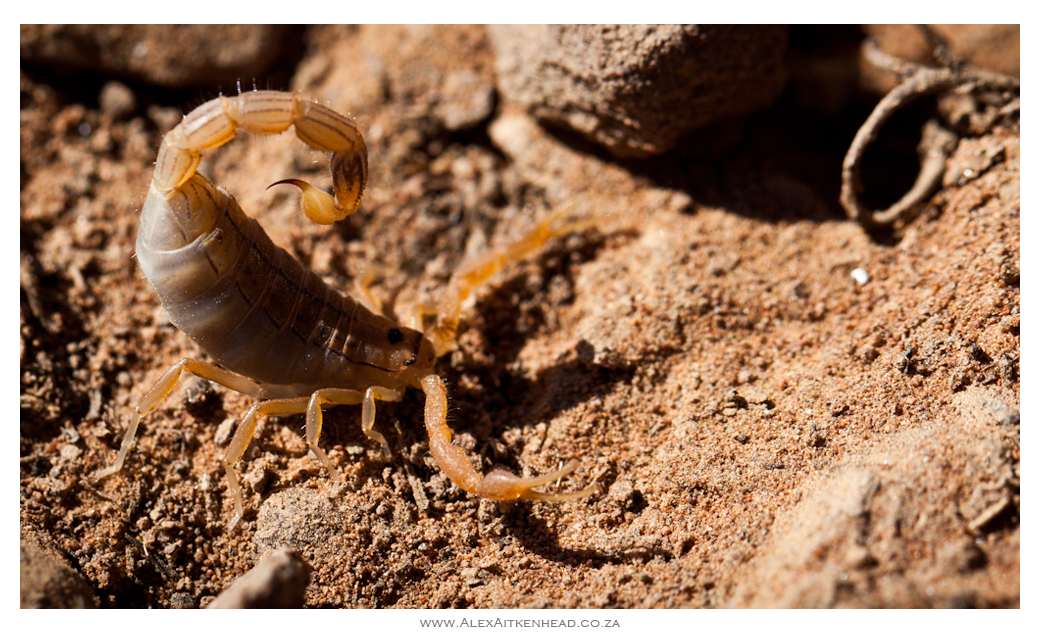 This scorpion was about 1 cm in body size, shot with a Canon 100mm f2.8 macro lens.  We stumbled upon this little fellow when our 2 year old son was picking up rocks to throw around, whilst we were admiring the Quiver Tree Forest of Gannabos farm.
According to the information below from Biodiversity Explorer, a thick tail scorpion uses its tail to burrow, but they also mention that the thicker the tail, the more venomous.
Lesson learnt here: no stone throwing in the desert 😉
“Parabuthus is an Afrotropical genus with 20 of the 28 species endemic to southern Africa. It occurs in areas of less than 600 mm of rain per annum and is absent in southern Africa from the extreme Eastern Cape, Kwazulu Natal, much of the Free State and the Highveld. The distribution extends northwards through eastern Africa to the Arabian Peninsula. Parabuthus avoids moist or humid conditions and is thus absent from tropical central and the western bulge of Africa.
It is a psammophilous scorpion adapted to areas of soft to hard gritty soil. They all dig shallow burrows in sand at the base of shrubs, under rock, logs or any suitable cover. The females are normally sedentary, staying at home, while males of certain species are lapidocolous, using any available cover during its wanderings or may even excavate a new burrow.
Parabuthus range in size from 40 to 140 mm long, usually longer than 70 mm. Parabuthus schlechteri, traansvaalicus and villosus are the largest buthids in the world, measuring up to 140 mm. The colour ranges from a yellow through brown to black without any of the characteristic markings found on other buthid scorpions. The legs are usually lighter in colour than the body. Most species have a very robust tail with the first 2 tail segments having nodes or ridges across which the aculeus (sting) is scraped producing a stridulatory, warning hiss. Some species stridulate more readily than others do.
Parabuthus is also the only buthid scorpion in southern Africa to stridulate in this way.
Parabuthus scorpions are of great medical importance and all species must be regarded as potentially lethal. In the north-western Cape scorpions are more of a problem than snakebite with the reverse being the case in Kwazulu/Natal.
The quick acting venom negates the need for large chelae which are only used to hold onto its prey while being stung and unlike the thin-tailed scorpions, the chelae are not used to kill or hold onto its prey while succumbing to the weak venom. Whether there is any logical connection between chela size and tail thickness is still debatable as Parabuthus also uses the thick tail for burrowing. The tail with stinger is held over the head ready to strike but Parabuthus can also execute a sideways defensive jab – so do not try and pick it up with the fingers!
Gerry Newlands was the first to mention that certain Buthidae scorpions spray venom up to 1 metre and the fifth metosomal (tail) segments of these scorpions are enlarged. The 3 species cited are Parabuthus schlechteri, P. transvaalicus and P. villosus. This has not yet  been documented conclusively and is refuted by some experts – so lets get it on video!”